The 10 Most Expensive Shoes in The World

They say that if you really want to get to know someone you should walk a mile in their shoes. We are completely on board with this sort of sentiment – as long as it’s one of the pairs featured in our list of the most expensive shoes in the world.

Hers - Most Expensive Shoes for Women

These delicate stiletto sandals are ballet pump pink. The first thing you’ll notice about them is the blossoming rose at the ankle that features a cascading diamond detail. The gems don’t stop here, either. Turn the shoe over and you’ll discover a gold glitter sole encrusted with a one carat diamond. The pair is priced at $25,000, though they're far from the most expsnsive shoes offered by the brand, and buyers must contact a Jada Dubai ambassador before they can make a purchase. The $7,675 Lagarta heels from Manolo Blahnik have earned their spot on the list of most expensive shoes and are art gallery worthy. Made with green suede, they wrap the wearer’s ankles and lower legs up in snaking vines and obscure the top of the foot with a water snake lizard detail. Designed by Blahnik himself in memory of his childhood, these one-of-a-kind shoes are limited editions and not intended for extensive wear.

These new editions from Tom Ford would look more at home in Fort Knox than a shoe boutique. The Pave Chain stiletto sandals are made from soft gold leather and finished with a hand-sewn Swarovski chain detail. They’re made in Italy, but ship around the world for just over $6,660.

Read About: Fragrances for Men to Wear at Work These pointed-toe ankle boots have a house of mirrors look to them. They’re crafted with luminous glitter leather and encrusted with shiny, reflective and sparkling spikes and studs. The heels, with their classic Christian Louboutin red underside, are a sky-scraping 10 centimetres tall. Each pair costs $1,890.

With a chrome and crushed leather look to rival a Bentley Continental GT, Alexander McQueen’s Pin Heel Bangle Sandals are shoes to be taken seriously. They’re a towering 10.5 centimetres tall and feature the classic Alexander McQueen signature on the sole. Despite having a take-no-prisoners aspect to the design, they’re made with 100 per cent goatskin, which means they’re actually pretty soft to the touch. While some designers try to make their shoes timeless, others choose to do exactly the opposite. Giuseppe Zanotti has just crafted a pair of $1,875 shoes that come with a golden watch where the ankle strap would normally be. They’ve been created in collaboration with fellow craftsman Christian Cowan and they’re made from luscious gold laminated leather.

His - Most Expensive Shoes for Men 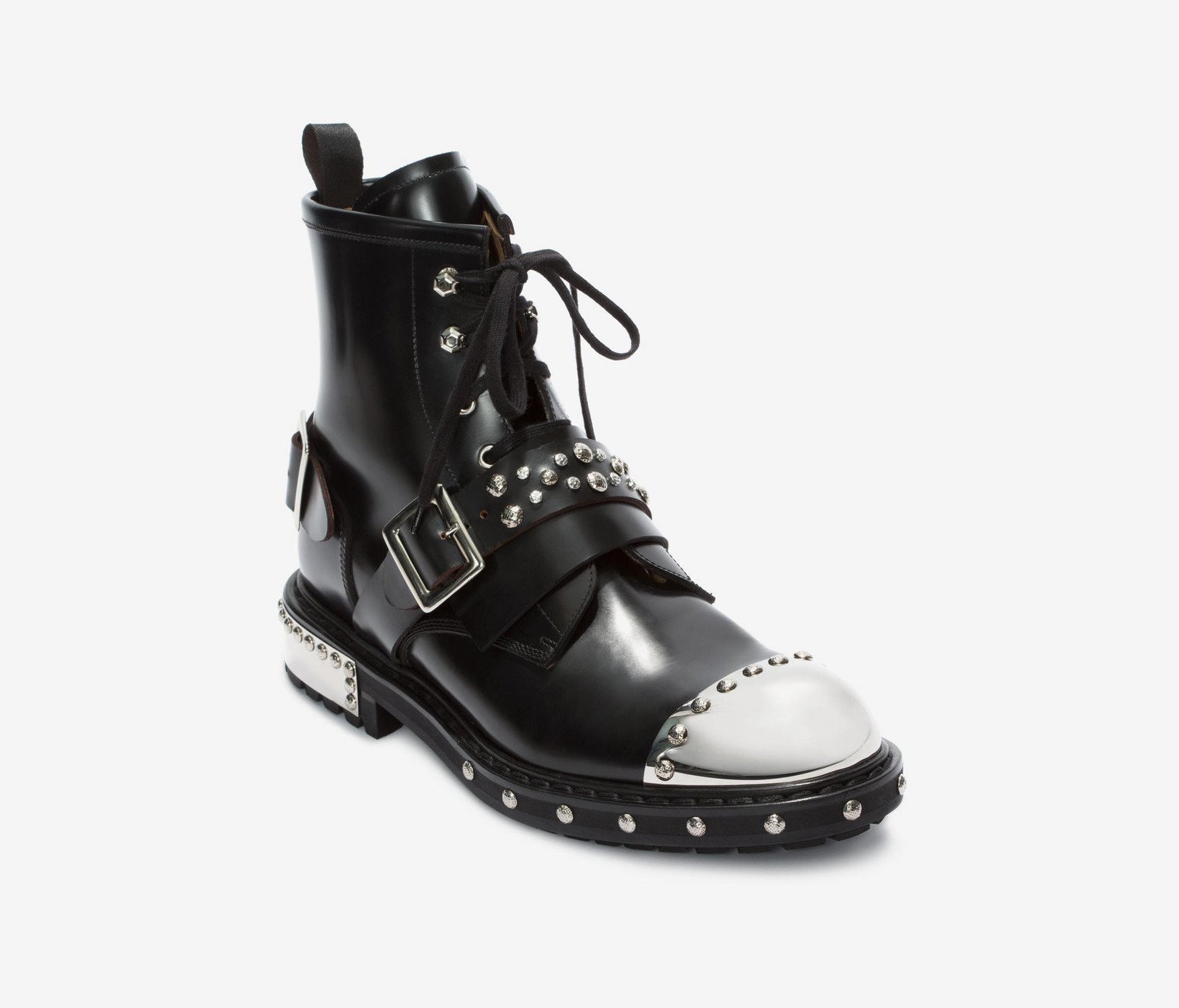 Alexander McQueen has channelled the heavy metal look with his autumn/winter footwear collection. These metal toe cap boots are one of the choicest options from the seasonal selection. Both the toe and heel plate are armoured with metal, and both the sole and buckle are finished with fierce metal studs. You can currently pick a pair up for $2,151. 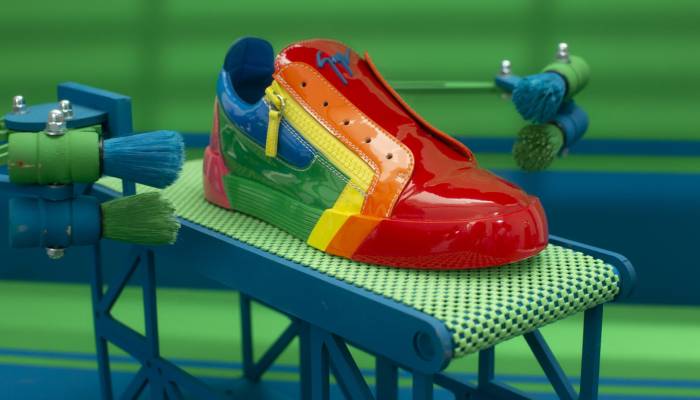 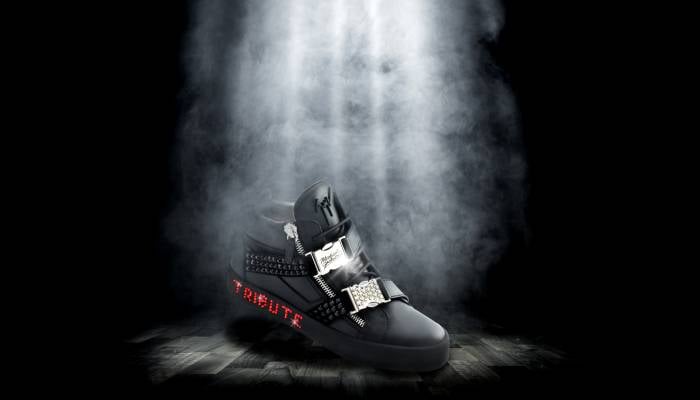 Giuseppe Zanotti’s latest range of shoes for men are real conversation starters. Firstly, there’s the RNBWs. As the name suggests, these glossy patent sneakers are Crayola coloured with stripes of pink, green, blue, yellow, orange and red. They’re available in children’s sizes as well as adults. Secondly there’s the Michael Jackson Tribute shoe. Available in a cyborg shade of silver or MJ’s classic black, they feature a series of red Swarovski crystals on the side that spell out the word Tribute as a homage to the king of pop. 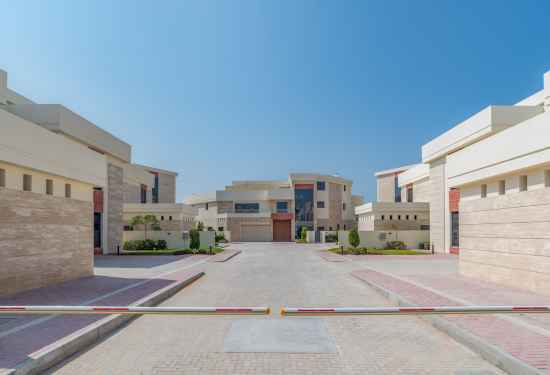 Priced at £12,000 these demure loafers come in Nero Blue and Tobacco Bis hues. Looks-wise they feature a scale-like pattern and a chunky heel. They’re crafted from a solitary piece of leather with not a hint of stitching on the laces or on the upper. They’re made in Italy but ship all over the world.

Louis Vuitton, made to order In eleven stores around the world Louis Vuitton offers a made-to-measure show service. Locations include London Bond Street, LA Rodeo Drive, Miami Aventura, Milan Montenapoleone, New York Fifth Avenue and Paris Montaigne. Each one offers clientele the opportunity to work on their shoes’ design in a private room where everything from the material and the colour to the construction can be tailored. Prices are bespoke, but hover around $6,000.