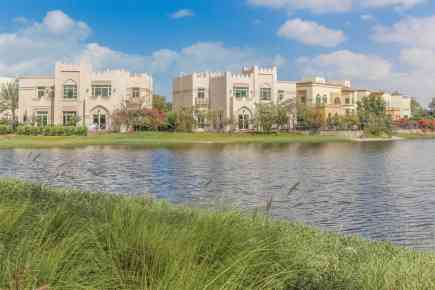 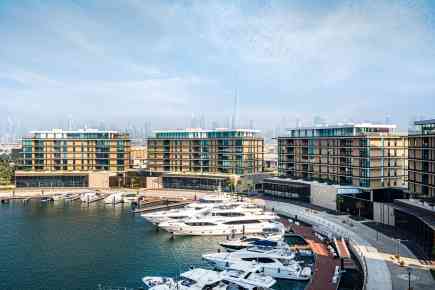 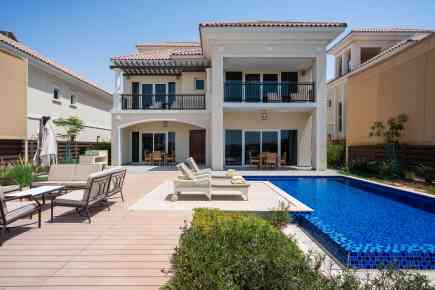 Dubai is a city known for luxury, with several prestigious neighbourhoods and districts where you can find some of the world’s finest homes. But there are a few high-end areas that are still largely unknown to most people, which helps them maintain a greater aura of prestige and exclusivity. Pearl Jumierah, a wedge-shaped island that branches off the entryway to the Jumeirah district, is one of Dubai’s luxury secrets.

To be fair, the island is not a complete unknown. It is famous as the home of the Nikki Beach Resort & Residences, the acclaimed Miami resort whose Dubai outpost opened its doors in 2018 and became a major hit among the city’s beach lovers.
​ 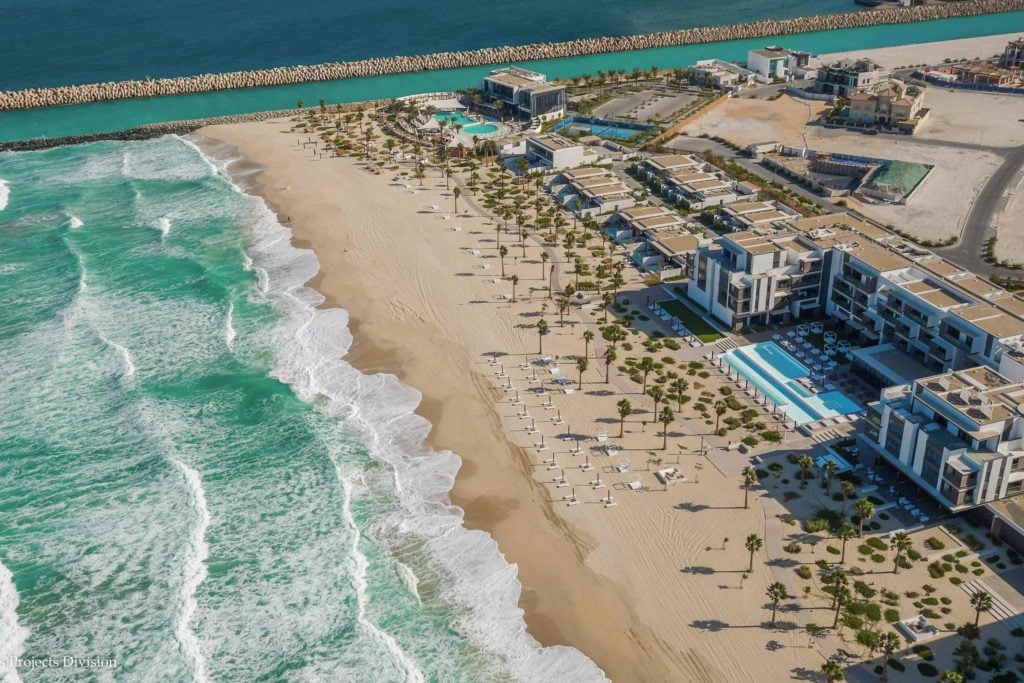 Pearl Jumeirah is a relatively small island, only a fraction of the size of its more well-known cousin, Palm Jumeirah. It is spread over a total area of approximately 8.3 million square feet, with a large section of it taken up by residential plots and Nikki Beach spread along the apex facing the sea. A large number of the plots have already been bought by homeowners, who have constructed expansive bespoke villas on the land. As far as neighbourhoods go, Pearl Jumeirah is easily comparable to Emirates Hills or Al Barari in terms of the exclusive custom-designed homes that it offers. And that fact that it is on a private island only accessible by one main road gives it an extra air of exclusivity.
​ In 1998, the world was introduced to Nikki Beach by entrepreneur Jack Penrod, who had been involved in Florida’s hospitality and entertainment industry since the early 80’s. He wanted to create a concept that would combine all of the vibrant elements of Florida’ culture - the beach, the nightlife, the visual arts, fashion and music. This led to the creation of a concept called Cafe Nikki, which was later refined and expanded into the resort we know today. Entertainment is at the heart of the offering at Nikki Beach, guided by the motto 'Celebration of Life’. The motto pays tribute to Penrod’s late daughter Nicole, for whom the resort is named.

Over the past two decades, Nikki Beach has brought its unique beachfront flair to 11 different countries with 13 beach clubs, 4 hotels and its own lifestyle division. The Dubai resort, which opened in 2018, fit seamlessly into the city, which is famous the world over for its dynamic beachfront lifestyle. It bears the signature Nikki Beach style with a predominantly white palette that gleams in the sunlight, contemporary architecture and interiors that present a sleek modern take on a tropical beach hut. 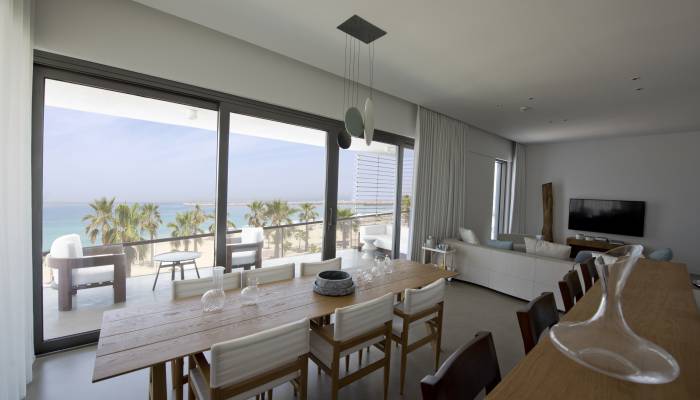 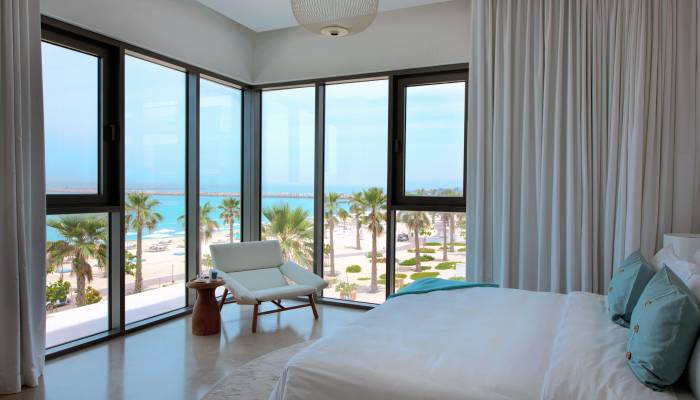 In total, there are 117 rooms at the Nikki Beach Resort, plus 63 apartments and an exclusive collection of 15 villas with private pools. There are four signature dining outlets within the hotel, the famous Nikki Spa and the highlight of the project - the Beach Club. Music is one of the driving factors of Nikki Beach, and you will always find a lively celebration along the coastline of the resort

The residences at Nikki Beach are perfect for a pied-a-terre when you want to get away from city life, and are also excellent options to consider for the discerning investor.
​ One of the other highlights of Pearl Jumeirah is the vast residential neighbourhood that forms its heart, comprising 300 residential plots. Several of the plots have already been purchased and are now occupied by stunning villas. The villas at Pearl Jumeirah are all fully bespoke, designed according to the vision of their respective owners. Presented below are four of the villas available at Pearl Jumeirah, to provide a clearer picture of the type of lifestyle you can expect here.
​ 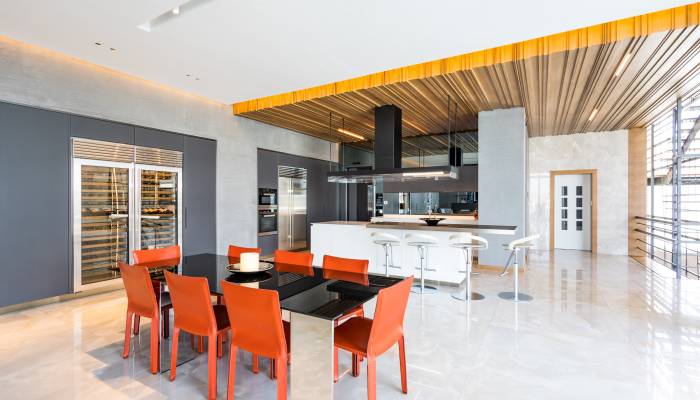 You have options such as an incredible contemporary home that features one-of-a-kind interiors that include onyx wall tiling, a Boffi-designed eat-in kitchen, and a stunning steel and walnut wood staircase that connects the upper and lower levels and serves as an intriguing art piece on its own. The home also has a lovely backyard with a pool, a sea view from all of its principal bedrooms, and enjoys easy access to Nikki Beach.

Or you could opt for a villa that can best be described as ‘majestic’ - with 10 bedrooms and exquisitely designed Regency-style interiors. Each room features meticulously crafted detailing with elements of gold, including the molding, fittings and the railings of the grand staircase.
​ 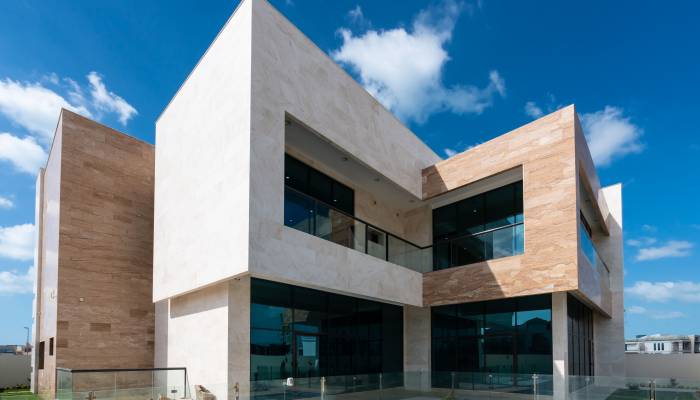 Above are two more examples of fantastic homes. One is a contemporary villa that sits carefully tucked away on one side of the neighbourhood. Stone and book-matched marble is used throughout the villa, giving it a look that is refined yet very understated. There is very little in terms of ornamentation, but every element of the design has been executed to perfection, and renowned European and American brands have provided the fittings. The other, which is being marketed exclusively by us, is another gorgeous example of Regency design. Once again, you have a truly lavish exterior with elements of gold used in the finer details, including the grilles of the gates. You also get some fantastic detail work in the molding that lines the walls, as well as in the elaborate tray ceilings in each room.

These villas and several more like them are available on Pearl Jumeirah, showcasing incredible architecture and design. Plot sizes range from roughly 9,000 to 11,000 sq ft and prices reflect what you would expect in a high-end neighbourhood. This is the perfect place to call home if you are looking for the best of the best in terms of luxury living.
​ This is a key factor for Pearl Jumeirah. Although it is an island meant to provide complete privacy and seclusion from the city, it also enjoys excellent road connectivity to key areas. The island sits at the entrance to the famous Jumeirah district of Dubai, where you can find the best shopping, dining and entertainment options in the city, not to mention some of its finest beaches. Though when it comes to beaches, the island has you covered all on its own.

Popular hotspots such as Downtown Dubai and DIFC are less than a 20-minute drive away, and it takes less than half an hour to get to Dubai Marina. Severl of the finest schools in Dubai are also less than a 20-minute drive away, including Jumeirah Baccalaureate School, GEMS Wellington Primary School, Jumeirah College and Kings' School Jumeirah, plus several nurseries. Several well-known hospitals and clinics are also quite nearby, including Belhoul European Hospital and Iranian Hospital.
​