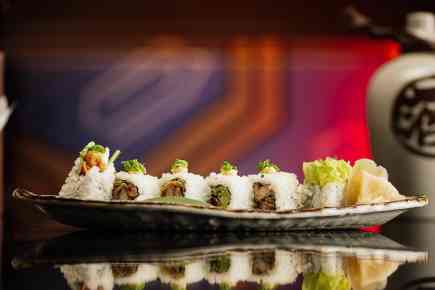 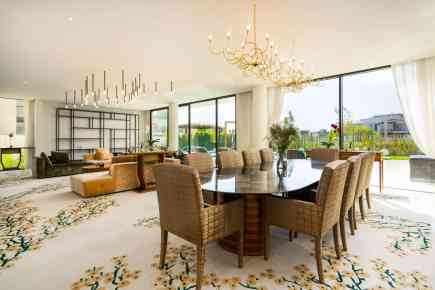 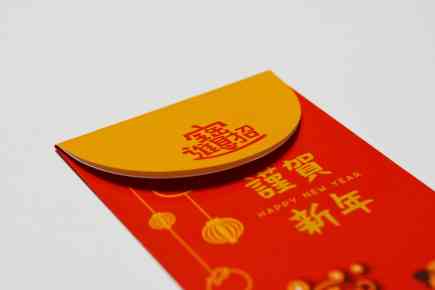 The Cullinan - the world’s largest gem-quality diamond found in the rough, divided into nine stones that found a home with the British Royal Family. In fact, the two largest stones cut from the original diamond are among the Crown Jewels of the United Kingdom. For a product to call itself The Cullinan, it would have to be nothing short of a gem itself and to stand out as a symbol of exclusivity and refinement. Fitting then, that a brand with the pedigree of Rolls-Royce chose to use the moniker for a vehicle that takes the concept of an SUV to new heights of luxury.

The name was also perhaps meant to allay concerns - after all, when one of the world’s foremost high-end carmakers decides to enter the SUV market, it’s bound to raise more than a few eyebrows. But given the fact that SUVs have been outselling sedans two to one over the past five years, that just makes good business sense. And if you want to persuade your clientele that you’re not making just another SUV, then you need to give it a name that’s beyond the ordinary. You don’t really need to describe a Rolls-Royce car. The mention of the name alone brings to mind its wide, imposing frame and the iconic front grille. Combining that with the typically boxy look of an SUV is a bold choice, and one that doesn’t quite do the Rolls-Royce aspect of the car full justice. From a head-on view, it still looks plenty intimidating and is almost indistinguishable from the saloon car (though a sharp pair of eyes might spot that the grille is a bit smaller). When you take the silhouette as a whole, however, it loses some of the charm of a Ghost or Phantom. Even compared to other luxury SUVs, such as the Lamborghini Urus or the Bentley Bentayga, the Cullinan comes across as a bit too heavyset.

That isn’t really a condemnation of its aesthetic, however. If you saw this cruising down the street, it would undoubtedly catch your eye. And even though it won’t appeal to everyone’s sensibilities, there’s no denying that it sets itself apart from any other SUV out there. 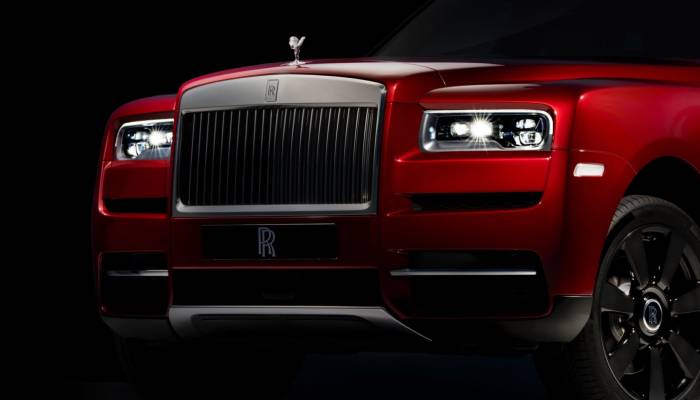 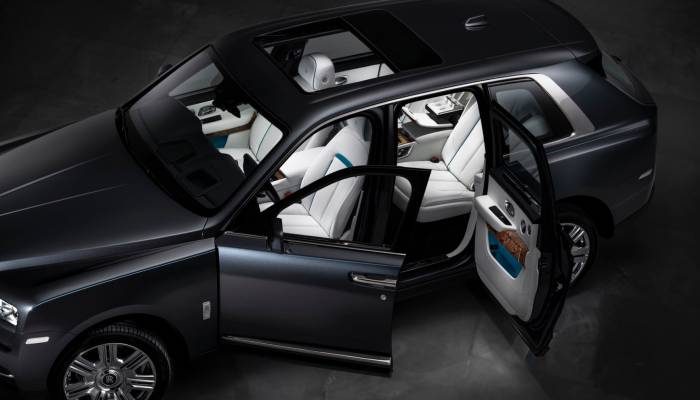 Modified silhouette aside, the Cullinan is unmistakably Rolls-Royce in terms of its design. The famous Spirit of Ecstasy hood ornament is ever present, available in silver, gold plating or carbon fibre. An impressively large glasshouse ensures that you have a full view of the road and your surroundings, whether you’re in the driver’s seat or the rear passenger compartment. And of course, the interiors are bathed in plush leather and polished wood.

You have a few different options when it comes to seating. The colour of the seats can be customised of course, with a wide variety of colours to choose from, and the rear seats give you a choice of configurations. You could opt for Lounge Seating, which features a very traditional and practical three-seat setup that can be folded away to create more room in the luggage compartment. If the Cullinan is more of an indulgence than a family car, then you might prefer the Immersive Seating option, which gives you two seats at the back separated by a central console housing a champagne cooler or whisky decanter. The seats have a massage function in case you’re not relaxed enough already, and this setup also includes a pair of Rolls-Royce branded whisky glasses (or champagne flutes, if that’s your preference). As an added bonus there is the Viewing Suite - a pair of folding seats and a small tabletop that can be deployed from the luggage compartment, allowing you to take in a panoramic view from the rear of the vehicle while enjoying a chilled glass of your beverage of choice. 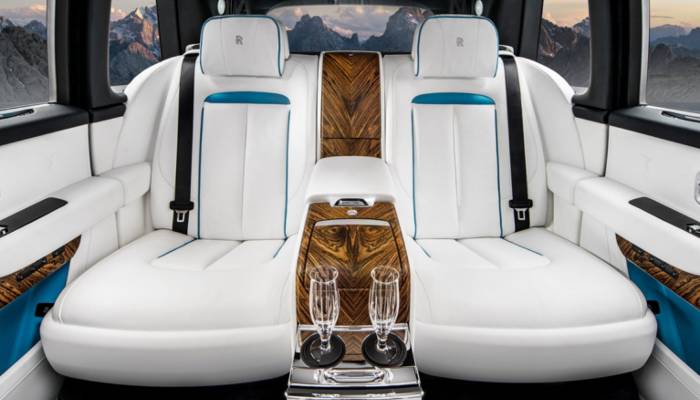 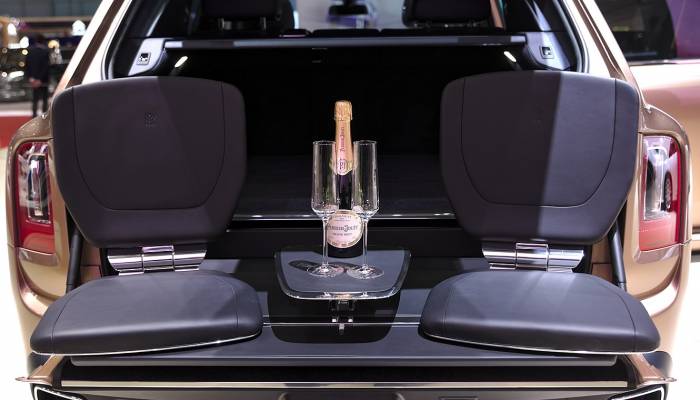 Another intriguing feature exclusive to the Cullinan is a glass partition between the rear seats and the luggage compartment. This ensures that the main cabin can be completely sealed off from any outside noise and be transformed into a private sanctuary.

Technology that Merges Style and Function

Rolls-Royce has avoided touchscreens for a long time, not out of an inability to incorporate them into their designs, but simply because the automaker preferred the tactile nature of buttons and dials. But a car like the Cullinan needs something a little different, and thus it became the first Rolls-Royce model to feature a touchscreen infotainment system. There are rotary controls, however, if you prefer a more traditional way to do things. The system itself takes its design cues and functionality from parent company BMW, so you can be assured that everything operates smoothly. 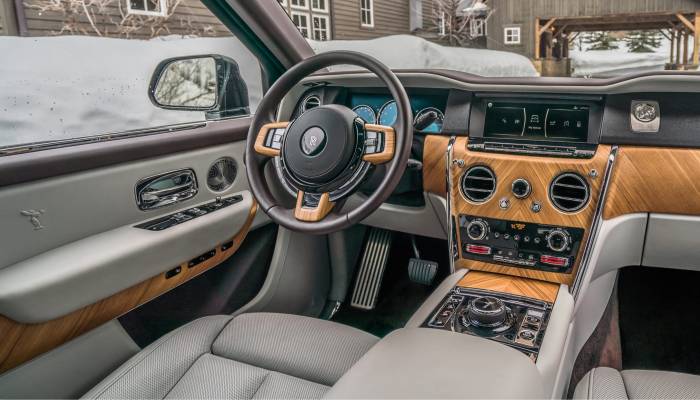 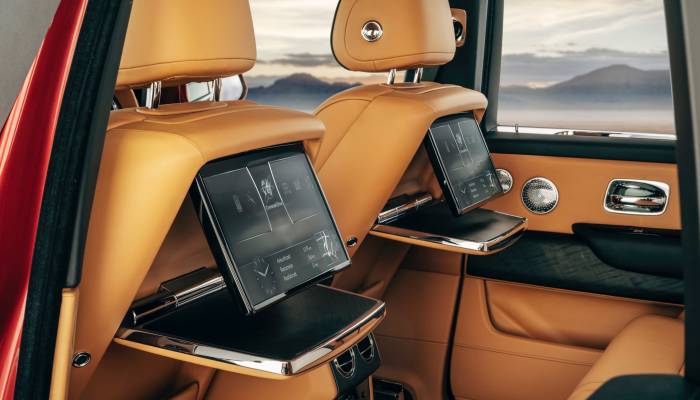 Whether you want to adjust the suspension, tweak the navigation system or simply open the hefty rear-hinged doors, just a tap here or the press of a button there is all you need. The car features a 360-degree parking camera, a night vision mode and on-board wifi. The screens and consoles can also be hidden away behind panels when not in use, to give the interiors that extra touch of sleekness.

Performance that Delivers a Punch

The Cullinan exhibits a level of agility that you really wouldn’t expect from a car of its size. The 6.75-liter V12 engine produces nearly 580 hp and takes it from 0 to 60 mph in just 5 seconds. You can push it to 155 mph, at which point the speed is automatically limited, but it’s more than enough for a smooth and powerful ride.

It is exceptionally maneuverable, and can perform turns that are much tighter than its bulky frame should allow. The suspension is also very well-designed, with a guidance system that scans the road ahead and makes adjustments so you can glide effortlessly over the bumpiest of terrains. And speaking of terrain, the Cullinan’s off-road mode is designed to let you handle everything from sandy dunes to snowy peaks. With a wading depth of 540mm, it can handle deeper waters than any luxury SUV, though does fall short of its more rugged mainstream counterparts. 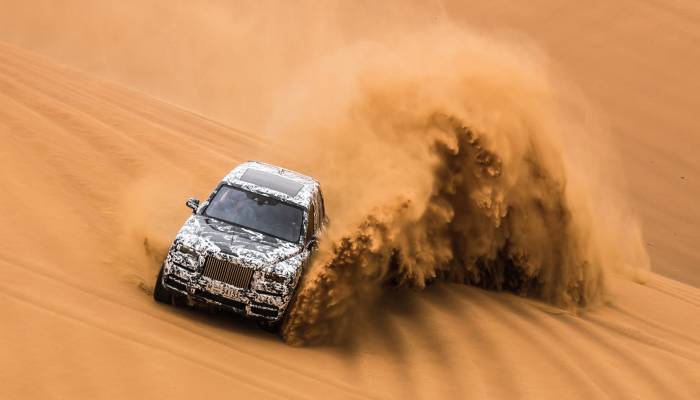 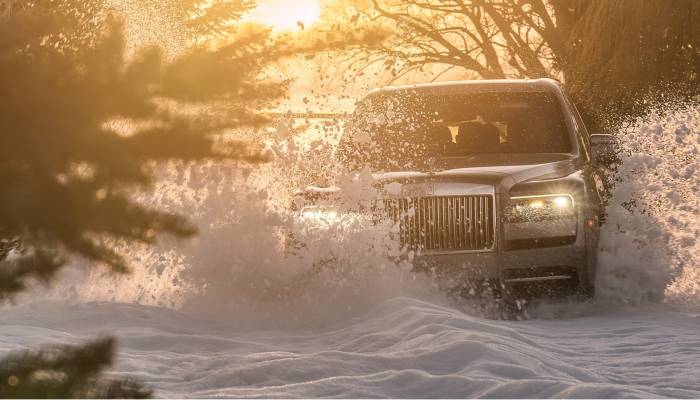 The Rolls-Royce Cullinan proves to be a mostly successful marriage of classic luxury car style and modern SUV performance, though its looks evoke mixed reactions. While calling it a gem might be a bit of an overstatement, it is definitely one of the best vehicles in its class and a great option for those who can afford it.